One thing I love to do on this site is cover places that I visit. There are so many attractions in and around my area that spotlight many unique forms of creativity that it would be a shame if anyone missed them. So if you are ever in Michigan be sure to visit Marvin’s Marvelous Mechanical Museum.

If you’re not planning to be in this State anytime soon, then this post is for you!

What can one say about this place? It’s weird. Weird but wonderful at the same time! And as the first exhibit (pictured below) will show, it draws its inspiration from some pretty solid places:

Marvin Yagoda, the museum’s founder, had been collecting the items that populate the 5,500-square foot building for some 50 years. He was a recognized expert in the field of mechanical and electrical game apparatus and was involved in the appraisal of such items for the television series American Pickers. We lost Marvin on January 8, 2017 at the age of 78.

But the eclectic showroom he started so long ago still operates and is open to the public seven days a week.

Let’s have a look at just some of the oddities you can expect to find:

You will find a huge collection of coin-operated animatronic dummies, mechanical games and other oddities here. The doctor above is just one of dozens of examples on display. If you plan on investing your money on this doctor’s diagnosis, prepare to be insulted!

Where to look first?

Walking in for the first time can be overwhelming! There isn’t a bare piece of wall or ceiling in the place.

“Vibratory Doctor”? Is that even legal?

Many of these vintage machines would have been on boardwalks or in sideshows, at a circus or freak show. I wonder why?

There are several examples of neon signage as well, with my favorite example being displayed above.

Marvin was an equal opportunity collector and so also added vintage advertising to his collection.

This museum is definitely a Home of the Weird as the above image shows. A 3-breasted Gypsy, anyone?

The museum also has many pieces to make you smile too. Such as the two Sailor Puppets above.

We are about half way through our tour, so if you’re getting a bit peckish, why not stop at the food stand and ask Humpty Dumpty for something to eat or drink?

What would a fun place be without a warped mirror?

I need to get me a truck like this when I go searching for things to add to my weird and wonderful collection!

Now all good things come with a price:

There is no charge to visit this museum but, as you can see above, donations to cover the cost of electricity are gratefully received! Also, almost all of the displays are fully operational and can be enjoyed for between 25 and 75 cents a play. This includes vintage arcade games (like Asteroids and Pac-Man), carnival games, pinball machines, and ‘Peep Shows’ (clean, of course!).

So please be sure to leave some of your hard-earned money behind!

I was thrilled to find such a unique and strange place among the attractions of Michigan! It won’t be for everyone, especially if you’re easily creeped out. But if you’re a student of history and a fan of early examples of coin-operated art and like to walk on the wild side at times… make your way to Marvin’s Marvelous Mechanical Museum!

This large format 28-page magazine supplement was quite an impressive publication in its day! The two copies that I have were inserted into the weekend edition of The Windsor Star newspaper in the late 1970’s. It had both black and white and color pages.

I found these at a yard sale just outside of Windsor, ON. I paid $2.00 a piece for them which is funny when you consider that they were given away free with a newspaper almost 40 years ago!

But I think you can guess why I bought them?

Obviously Mickey and Minnie caught my eye and so buying that issue was a no-brainer. I also love vintage television programs so the other issue also became a must-have.

So let’s take a look at the content of the article entitled 50 Years of Mickey Mouse:

This was a fun but brief article which you are welcome to read by enlarging the pictures above. I especially enjoyed page 11 as I have some of the merchandise pictured there!

Apart from the cover story in the second issue of this set, I found another Disney reference inside. Disney placed an advertisement on pages 14 and 15:

The contest would award 40 vacation trips to Walt Disney World, 100 authentic Mickey Mouse watches, and 200 Fantasia soundtracks. All you had to do was state how many cookies you could see in the jar. Disney even made it easier by giving the possible answers in the form of multiple choice on the entry form.

Enlarge and read those rules!

Unfortunately we are all 39 years too late to enter. Just our luck, eh! But it is still fun to see these old promotions and product tie-ins.

Although I love Disney, it doesn’t have a stranglehold on my interests. My attention turns to anything interesting and especially vintage!

This post contains no less than ten LPs I found at a local flea market. And what they contain is pure entertainment gold:

The Shadow is a vigilante crimefighter and one of the most famous adventure heroes of the twentieth century. He has been featured on the radio, in a long-running pulp magazine series, in comic books, comic strips, television, serials, video games, and at least five films.

The character debuted on July 31, 1930, as the mysterious narrator of the Street and Smith radio program Detective Story Hour developed in an effort to boost sales of Detective Story Magazine. Later a magazine based around The Shadow was created. The first issue of The Shadow Magazine went on sale on April 1, 1931. On September 26, 1937, The Shadow radio drama, a new radio series based on the character, debuted. And the rest is history!

The most famous man to voice The Shadow was Orson Welles. And by coincidence, the next two LPs I found feature him: 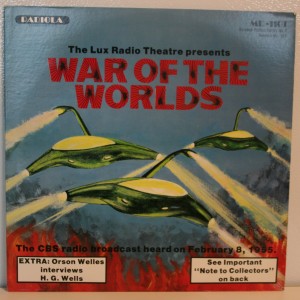 Many may not know that Welles got his start in radio. He did a little show with The Mercury Theatre on the Air called War of the Worlds (October 30, 1938) which threw a whole nation into panic and chaos. But it certainly got Welles some attention!

The copy of War of the Worlds that I have is not the original broadcast, but a reproduction of the play by The Lux Radio Theatre done on February 8, 1955.

Keeping with the science fiction and adventure genre: 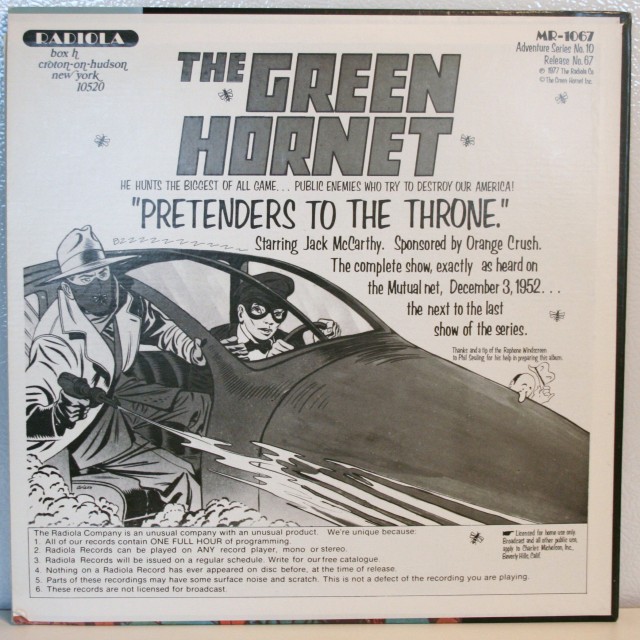 The Green Hornet and Kato

A masked crime-fighter created 1936 who first appeared on radio. The character appeared in film serials in the 1940s, a network television program in the 1960s (co-starring Bruce Lee as Kato), multiple comic book series from the 1940s on, and a feature film in 2011.

The Green Hornet is the alter ego of Britt Reid, wealthy young publisher of the Daily Sentinel newspaper. By night Reid dons a long green overcoat, green fedora hat and green mask to fight crime as a vigilante. He is accompanied by Kato who drives their technologically advanced car, the “Black Beauty”. The twist for this character is that he is believed to be a criminal, a cover he uses to infiltrate the underworld and foil their plans.

Let’s continue with another fictional character that focuses more on thinking than punching:

Basil Rathbone played Holmes and Nigel Bruce played Watson in fourteen U.S. films from 1939 to 1946, and in The New Adventures of Sherlock Holmes on the Mutual radio network from 1939 to 1946.

The top LP features two half-hour episodes from the radio New Adventures series and features some nice, if simplified, artwork on the cover. For many of these old LPs it is the covers that draw in the collectors!

The bottom two LPs feature a more generic cover with only the text changing. Not as interesting for collectors, but easier to produce for the art department!

Next I have two LPs that feature some of the finest non-Sherlockian mystery shows:

Many A-list actors and actresses took a turn at radio in the early days, some even lending their names to the programs, such as Mystery in the Air with Peter Lorre.

Other times, the radio program was popular enough to be made into a movie:

The Fat Man was popular during the 1940s and early 1950s. The detective started out anonymous but rapidly acquired the name ‘Brad Runyon’. Broadcast from the studios of WJZ in Newark, New Jersey, the series premiered on the ABC Radio Network on Monday, January 21, 1946, and ran until 1951. In that year, 1951, it was finally made into a movie for the silver screen.

The first Thin Man movie was released in 1934 and spawned many successful sequels. The movies were popular because of the volatile relationship between the main leads. It was a natural to recreate this chemistry on radio!

My favorite comedy duo of all time! From silent films to talkies, these two comedians had no equal. Their low-key approach stood in stark contrast to the frantic antics of other popular acts of the day which only served to endear them to fans and critics alike! 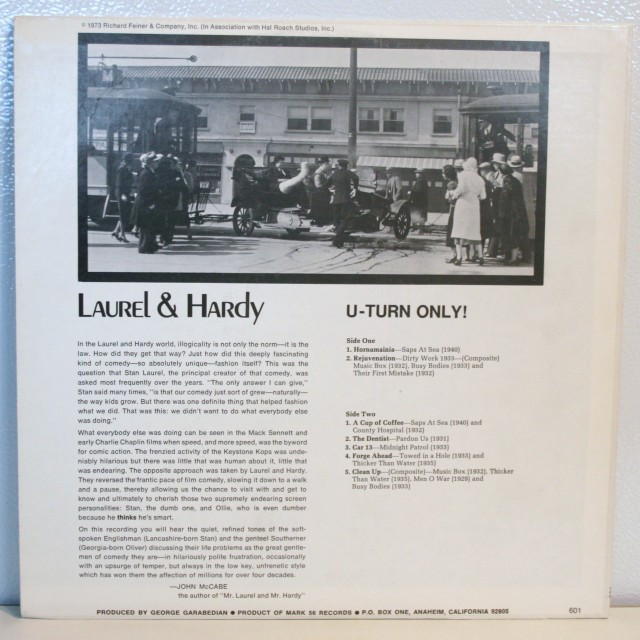 This LP features some skits taken from movies and short subjects filmed between 1929 and 1940. Think of it as more of a comedy album than a soundtrack.

I look forward to sitting in the dark and listening to these great old programs! Now, at the end of this post, I’d just like to remind my readers that “The weed of crime bears bitter fruit. Crime does not pay… The Shadow knows!”