“The true story of a boy whose dreams built a kingdom” is the tag line for this production which seems pretty inspiring. But with a Rotten Tomatoes rating of just 20% you know this movie isn’t destined to be a classic. Read my DVD review to see why…

This movie was loosely based on ‘a true story’ as recounted in the book of the same name as the movie, to wit:

Synopsis: This film is about Walt Disney’s early years. For ten years before the creation of Mickey Mouse, Walt Disney struggled with, failed at, and eventually mastered the art and business of animation. Walt Disney worked in a variety of venues and studios, refining what would become known as the Disney style. This film captures the years 1919 – 1928, creating a portrait of the artist from age seventeen to the cusp of his international renown.

Hopefully Timothy S. Susanin did a better job of researching the facts in his book than the movie did! The forward for the book was written by Diane Disney Miller, Walt’s daughter, so you naturally assume the content is legit. Well, the book may have been closer to the truth, but thankfully she wouldn’t have seen this movie (as it was released after her passing) as I’m certain she wouldn’t have approved (even though some sources give her a writing credit). As an example, one scene has Walt eating a sandwich out of a garbage can while obsessing over a mouse he had found in his studio. When the mouse runs away, Walt is depicted as almost having a mental breakdown over its loss. I find that hard to believe! However, the movie does depict Walt’s excessive smoking accurately.

From my negativity, you no doubt have guessed that I don’t like nor appreciate this movie? Please read on for my main reasons why:

The movie starts off well enough with only slight deviations from the truth which are forgivable to achieve a more streamlined plot. But about half way into things the facts become the enemy and artistic license rules the day!

Anyone watching with no knowledge of this time in Walt’s life will come away with entirely the wrong idea about the man, the events, and how they shaped the Walt Disney Company we know today. Although Walt had his bad points, this movie makes him a completely unsympathetic character with very few redeeming qualities. Even his determination to succeed and unwavering optimism is implied to come from others and not himself. And don’t get me started on how Roy is handled.

The production values were good on a television movie level or for direct-to-video release, so kudos to director Khoa Van Le for that much. The acting was fair but the editing was choppy and some details of the plot were poorly relayed making for some confusing moments. Here is the trailer:

About the only thing I can say that is positive about this movie is that the cover art on the DVD packaging is awesome!

DVD Review Summation: The movie had the proper bone structure (basic facts) but entirely the wrong skin (or details) over top.

I will keep this movie in my Disney media collection because I’m a completist but I won’t likely revisit it anytime soon. You can check out the official website here to review their promotional materials or order a copy of the DVD for yourself.

I purchased a copy of this movie for review. No compensation was received.

Welcome to this month’s Blogorail Yellow Loop. Today we are sharing movie night ideas based on Disney movies from the 1980’s.

Condorman? Really? Yup, we’re starting the loop off with an old live-action superhero romp from 1981.

Both Super Spy and Super Hero

With Michael Crawford in the lead role (he of Some Mothers Do ‘Ave ‘Em fame) one might assume that he would fail miserably at being both! But surprisingly he does quite well, although in many unorthodox ways. Like strapping on a highly improbable glider suit and jumping off of very high places while carrying a woman on his back. Hey, you can’t call yourself ‘Condorman’ without wearing wings and flying!

It doesn’t hurt his chances for success either that he has a deep-pocketed government backing him up and creating all sorts of cool spy gadgets directly from out of his comic books. Like this super car:

The Condormobile was a modified Nova Sterling kit car. There are more gadgets, but I’ll let you be surprised when you watch the movie for yourself. On that point it may be hard to find new copies as it is out of production. It was available through the Disney Movie Club at one point (see first picture above) but not now. All is not lost however as you can get copies on eBay ($25 US/$32 CAN and up) or download it like I did from iTunes ($9.99 CAN). And forget about Blu-Ray!

Although Condorman isn’t one of Disney’s most recognized properties, you would expect an accomplished super hero to show up from time to time. And Condorman has done just that:

From left to right: A Disney Infinity Glider upgrade, a silly toy, and a Vinylmation figure, just to name a few. And of course he had his own three-part comic book adaption from Whitman Comics:

But was the movie any good? Here is My Review: This movie plays like one of the made-for-TV movies shown on Disney’s Wonderful World of Color. Not one of the best ones, though, maybe just slightly in the middle! It offers nothing new to the spy genre and is slow in places but still offers up some truly entertaining moments.

For me the best part was watching Michael Crawford act in a semi-serious role. You may best remember him from The Phantom of the Opera but he was a major comedy star long before that. Be sure to check out this posts Fun Fact for more on Crawford.

I would give this movie 3 out of 5 Stars but still recommend it for a family movie night!

Fun Fact: Michael Crawford appeared in Wall-E by means of the video clips Wall-E played in his ‘home’. You can see him singing, dancing, and most importantly, holding hands.

For more ways to beat summer boredom, check out the other great posts from the Blogorail!

Here is the map of our Magical Blogorail Yellow | Disney Movie Night | The 80’s Loop:

Welcome! Please prepare yourselves as we ready this post to travel into the deep past of cinematic history. Back to a time when ‘technology’ wasn’t a word yet and films were still in black and white and without sound. If you’re ready, I give you:

This was the first motion picture filmed underwater. Actual underwater cameras were not yet invented, so a system of watertight tubes and mirrors were used to allow the camera to shoot reflected images of underwater scenes. These had to be staged in shallow sunlit waters which then doubled for deep-sea locations, like the ocean floor.

So there was some ‘technology’ involved. In this case, brothers Ernest and George Williamson did the honors, and here is what the title cards had to say about their contribution:

These two inventive men did such a good job that they even got a few seconds of screen time, something even the director, Stuart Paton, didn’t get! And here they are: 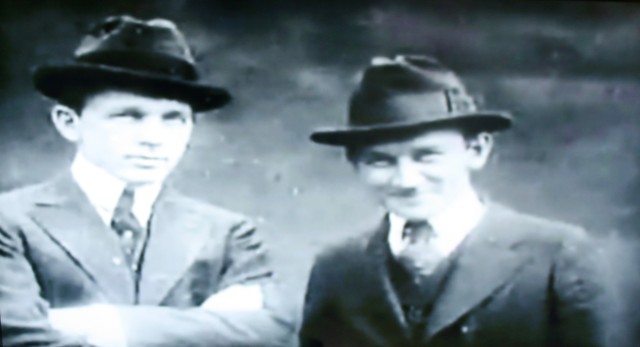 The film was made by The Universal Film Manufacturing Company which was later to become Universal Pictures. The film’s innovative special effects, location photography, large sets, exotic costumes, sailing ships, and full-size navigable mock-up of the surfaced submarine Nautilus led to an incredibly high budget for the day!

And just how good were the effects in this film? Let’s have a look at some stills:

Looking like a blurry picture of the Loch Ness Monster, this image could be of almost any modern-day submarine. There was no effort to make the craft look futuristic. 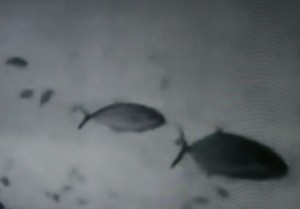 The Williamson boys did their best, and I’m sure these images looked better back in the day on the big screen, but the print I viewed did them no justice. But considering this was the first time anyone had even tried to film under water, kudos for the effort!

There were some similarities between Disney’s big budget 1954 film. Such as the undersea walking, farming, and funeral scenes: 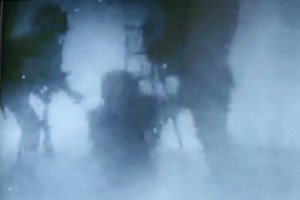 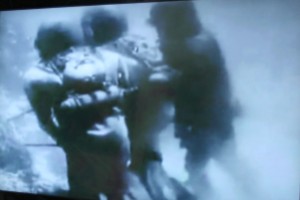 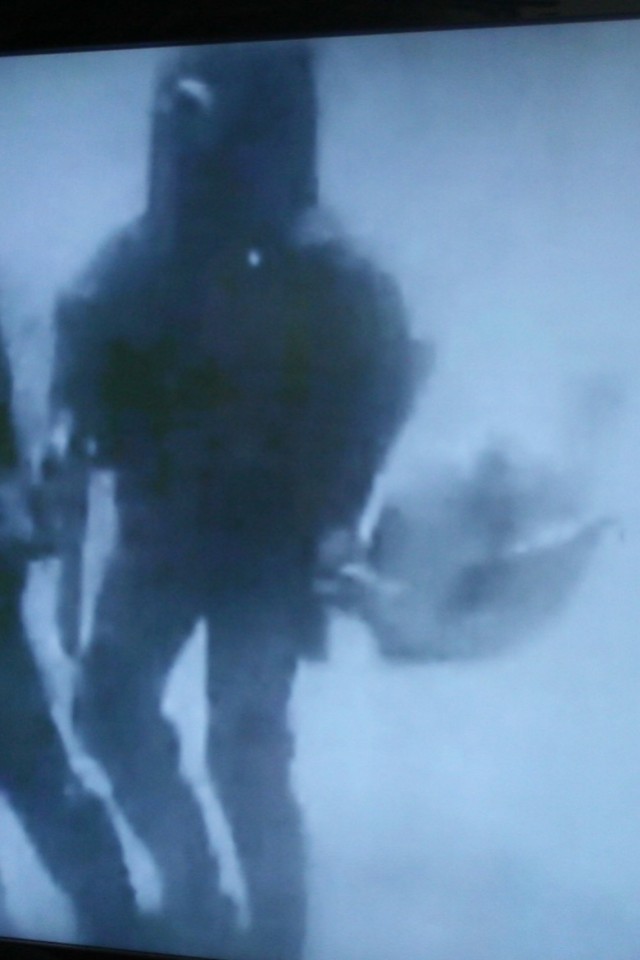 Allen Holubar plays the title character of Captain Nemo. His performance was… interesting. I think they must have served a lot of ham at the catering truck during filming. His performance was over-the-top to say the least, but he had some strong competition from the rest of the cast!

Both my wife and I saw this moment in the film and thought it looked a little like Santa Claus on Weight Watchers talking to his elves! Once that image got into our minds, it was hard to take him seriously throughout the rest of the film.

Before I rate this film, let me give you a brief (?) synopsis of the plot: A giant ‘sea creature’ has been sinking ships on the high seas so the government sends a professor and his daughter (?) on another ship to investigate. Seems safe enough. It wasn’t. Nemo rams the ship and then rescues the Professor and his daughter and spends half the film showing them the ocean floor. Meanwhile, a balloon is launched (?) which crashes on an island inhabited by ‘a child of nature’, or beautiful jungle girl. This is a nod to another Jules Verne classic, Mysterious Island. Then a yacht arrives (?) with a guy who abandoned a girl on the same island years earlier and he just thought he’d drop by to see if she was still alive. Seems a decent thing to do. But one of the balloon guys kidnaps the girl and takes her onto the yacht which is then torpedoed by Nemo after which he rescues them too.

Now here is where it gets interesting:

In elaborate flashback scenes to India, Nemo reveals that he is Prince Daaker, and that he created the Nautilus to seek revenge on the yacht guy for causing the death of his wife and for stealing his daughter (!) He is overjoyed to discover that the abandoned wild girl is his long-lost daughter, but then he drops dead. His loyal crew bury him in the ocean, disband, and leave the Nautilus to drift to its own watery grave.

The film ends with a shot of one of the balloon guys and the long-lost daughter looking off into the sunset. Presumably, everyone else died. The end.

I would give this film a 3 out of 5 Stars. It doesn’t deserve that many stars based on the storytelling but it is pretty amazing that they managed to film under water and do a fairly good job of it. Also, you have to consider how much of an impact it would have had on 1916 audiences!

I recommend the Disney version.