The Parent Trap was released in 1961 and stars Hayley Mills (in her second of six Disney films), Maureen O’Hara and Brian Keith in a story about teenage twins who try to reunite their divorced parents. 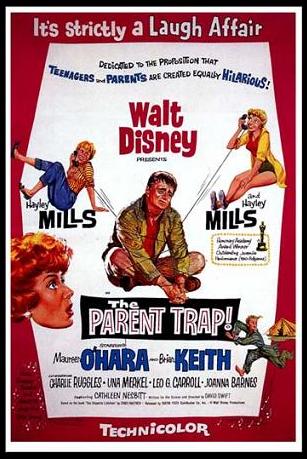 The screenplay was based on the 1949 book Lottie and Lisa by Erich Kästner. The movie was nominated for two Academy Awards, was broadcast on television, saw three television sequels (The Parent Trap II, made in 1986, starred an adult Hayley Mills), was remade in 1998 with Lindsay Lohan, and, back to 1961, was made into a comic book by Dell:

Dell Comics was the comic book publishing arm of Dell Publishing, which got its start in pulp magazines. It published comics from 1929 to 1973. At its peak, it was the most prominent and successful American company in the medium. In 1953 Dell claimed to be the world’s largest comics publisher, selling 26 million copies each month.

At 15 cents per copy, at least they were affordable! Dell Comics was best known for its licensed material, most notably the animated characters from Walt Disney Productions.

Let’s have a look inside the book: 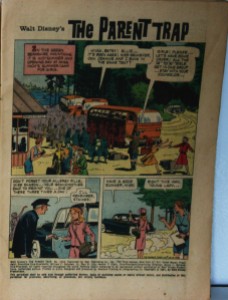 Above and on the left is the inside cover featuring stills from the film covering the main plot points. Above and on the right is the first page which sets up the story with the arrival of the twins at Miss Inch’s Summer Camp for Girls. 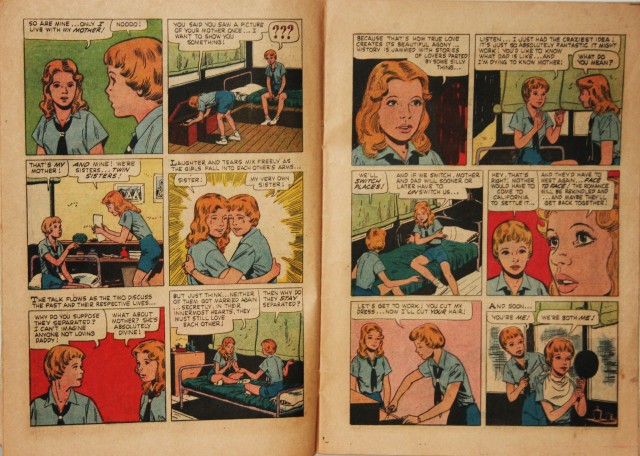 The girls finally realize they are twins!

The infamous ‘sock in the eye’ scene between the parents

As was typical of Dell Publishing, the writer and artists don’t get any credit, so it is likely that they used staff artists and not Disney animators. Although  other Dell titles, usually depicting animated characters, sometimes did use Disney staff for the artwork.

This comic has two more unique features. First, on the inside back cover there is a nice spread explaining how twins were viewed and treated in the past:

“A sure cure for colic in an animal was to have a twin kick it seven times.” Boy, I’m sure glad that practice never made it into modern pediatrics!

The second unique feature is on the back cover. Instead of advertising (which this entire comic book is void of) there is a one-page gag strip based on The Parent Trap twins:

The only drawback of reading the comic book over viewing the movie is that you don’t get to hear the great songs written by Richard and Robert Sherman which included “The Parent Trap”, “For Now, For Always”, and “Let’s Get Together”. “Let’s Get Together” (sung by Annette Funicello) is heard playing from a record player at the summer camp with the tune being reprised by the twins when they restage their parents’ first date.

The title song was performed by Tommy Sands and Annette Funicello, who were both on the studio lot shooting Babes in Toyland at the time.

So I guess in the end, everyone was able to ‘get together’ to make this film magical!

Now a Travel Consultant with Pixie Vacations for over eight years, Mike has helped many of his readers plan and have incredible Disney vacations of their own. Check us out on Facebook and Twitter. Also, connect with us on our Pixie Vacations by Mike Ellis Facebook page to submit a quote request or learn more about all of your possible vacation destinations!