A long title for a short entry in the catalogue of Disneyland Records. These story records are indeed short on content but perfect for little ones with short attention spans. This offering even has eleven storybook pages to help focus the listener.

Front and back of the sleeve

Now let’s have a look at the storybook pages within:

I was very glad to see no coloring or children’s name scrawled on these pages! Also, there is no hole punch through the top right corner. This was a technique practiced by retail stores to identify discounted LP’s that could not be returned for a refund. Most of my Disney record collection has just such a hole punched in the corners. Boo retailers!

Just for a bit of fun, take a look at the time on the punch clock at The Mouse Factory where Mickey works:

Who starts or ends their shift at 2:50 in the morning or afternoon? I guess when it’s your image on the clock, you can punch in or out any time you want!

This is one of my favorite Silly Symphonies (1934) and I have a few items of memorabilia featuring it in my collection. It’s a classic tale of industriousness versus laziness with the lead character, the Grasshopper, learning a sobering lesson… the hard way! 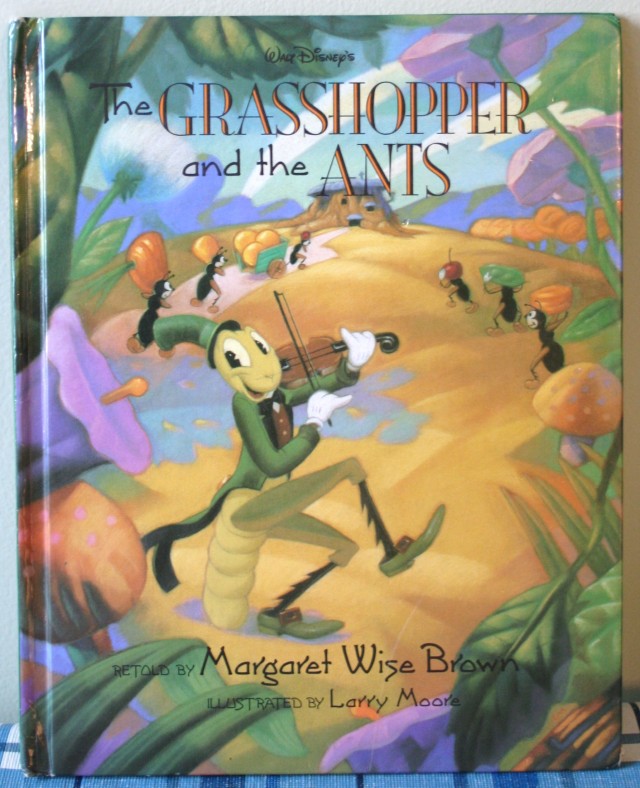 Let’s have a look at the story along with some of the artwork by Larry Moore:

The Grasshopper is a happy-go-lucky fellow who thinks the world owes him a living, so he does nothing all summer but play his fiddle, dance, and eat whatever is within easy reach. In contrast, the ants are busy collecting food for the winter. They have no time to play!

The summer is quickly passing, but the Grasshopper just doesn’t care. He continues to play and dance.

After getting an ant to goof off with him, the Queen ant arrives and warns him of his folly. But the Grasshopper doesn’t listen and dances away.

Winter finally arrives and the Grasshopper finds himself without food and shelter. Near collapse, he comes upon the ants’ home. The ants are warm and safe, enjoying the fruits (literally and figuratively) of their summer-long labor.

When the Grasshopper knocks on their door, ten sympathetic ants help him in and care for him. But then he has to face the Queen!

He begs forgiveness for not listening to her warnings and promises to change. The Queen has mercy on him and charges him to play for the ants as payment for sharing their bounty. In the end, all are happy!

The book contains the following page about the author:

I would give this book a 4.5 out of 5 Stars as it covers the story well and has a very good moral for children, but without being overly preachy about it. The artwork is beautiful and rendered in a soft way. I take a half-star off because it may not have characters that children of today would warm up to.

From WDP comes a Capitol Records release of a truly entertaining Silly Symphony: The Grasshopper and the Ants. Released in 1934, this was one of Aesop’s fables, reimagined by the animators of Walt Disney.

A Capitol Record-Reader was a cherished item for any child of the pre-TV era. They came with two double-sided 78″ (unbreakable) records which enabled the child to hear the story being read by announcer Don Wilson while reading along by turning pages when the sound of a bell was heard.

Pinto Colvig was the voice of the grasshopper, whom you might better remember as the first voice actor behind Goofy. His distinctive voice is clearly heard here, along with Goofy’s signature song ‘The World Owes Me a Living‘. But the Grasshopper sung it first! Goofy wouldn’t warble the tune until 1935 in the Disney Short entitled On Ice.

The record-reader is filled with many illustrated full-color pages, such as these:

Just as an aside, the ants sound a lot like Chip and Dale. And if you think about it, maybe this silly symphony was on the minds of the animators at Pixar when they thought up A Bug’s Life. There we have the similar theme of industrious ants storing up food for the winter, and lazy grasshoppers who just want to have fun, leaving the hard work of preparing for the winter to others. Of course, the outcome is different, but the bones are there!

You can find The Grasshopper and the Ants on disc one under the heading of Fables and Fairy Tales.

I found this record-reader at a local antique shop and was able to purchase it for just $30.00 CAN. It is in near-mint condition with only natural yellowing of the paper. It was released in 1949, so a little yellowing is to be expected, and I doubt a better copy exists! There are some scratches on the records, but none that cause the records to skip.

Here is an image of the original poster for the theatrical release in 1934:

If you’d like to further research this particular Silly Symphony, you can read a condensed version in the 360-page coffee table book Walt Disney’s Mickey and the Gang: Classic Stories In Verse (2005, Gemstone, ISBN: 1888472065). On pages 14 and 15, you can read the history of the film, and of its place as the first installment of the Good Housekeeping series of full-page illustrated versions of the classic Disney films (1934-1944).

Each version of this fable is different, although all rendered by Disney animators and artists. The most detail is found in the film version, of course, but one detail is added in the record-reader: The Queen offers the Grasshopper a chance to join the ant colony and work along with them, living with them through the long winter. She does not do this in the theatrical version. He refuses, is reminded of his poor choice later, where he admits his mistake. The Good Housekeeping version strips the tale of almost all details, leaving only the basic moral in tact.